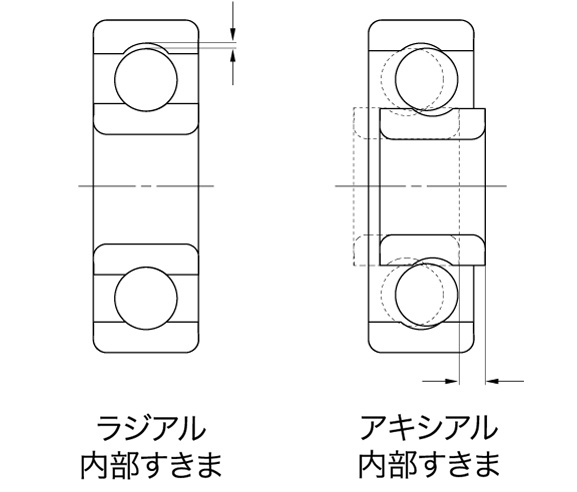 Remarks: The measurement load is: 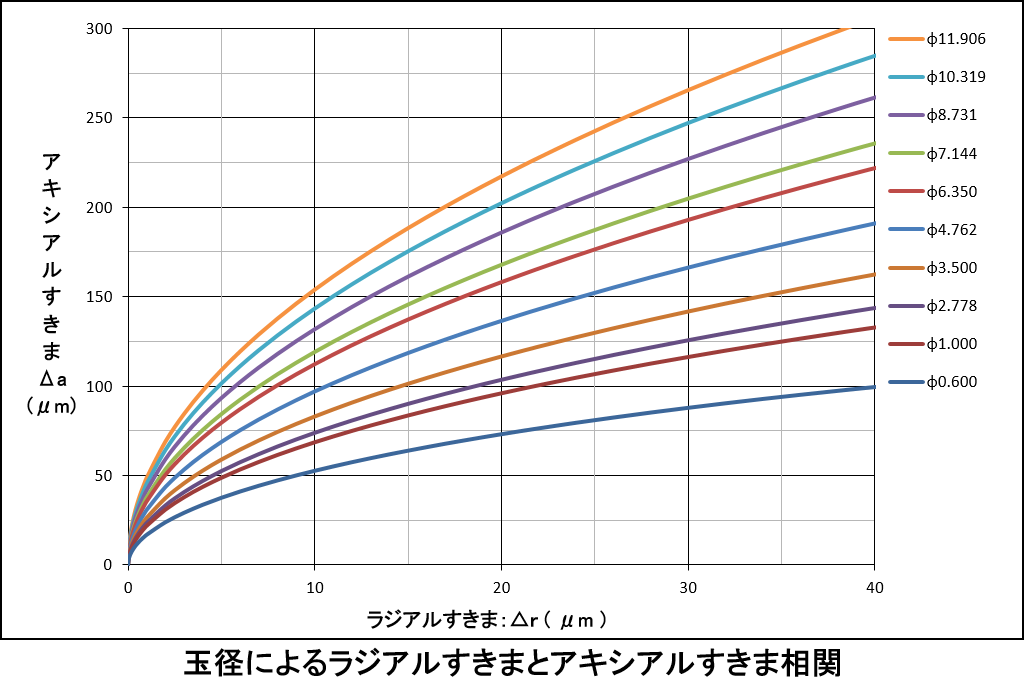 Theoretically, the longest bearing life can be achieved by setting the clearance during operation to a slightly negative value. However, it is also known that the life becomes significantly shorter when the negative clearance exceeds this value, even to the slightest degree. Therefore, normal practice is to select an initial clearance so that it becomes slightly positive (away from zero). Generally, MC3 is selected for miniature/small bearings, and C0 is selected for standard bearings. 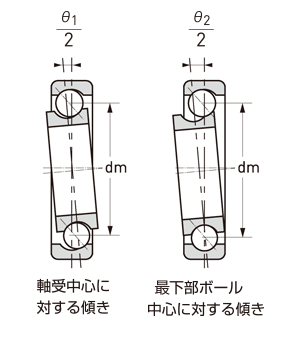 During the actual use of a bearing, it may receive a moment load as a result of factors such as shaft deflection due to load and the housing’s cylindricity. At this time, an inclination called the “angular clearance” is generated at the inner and outer rings. If the allowable angular clearance determined for each bearing is exceeded, this may cause an abnormal stress between the raceway and the ball, which will result in high temperatures or flaking.

Angular clearance refers to an angle that may be freely inclined when either the inner or outer ring is fixed, and when the ring that is not fixed is tilted to the left or right. The inclination around the center of the bearing is defined as θ1, and the inclination around the center of the bottom ball is defined as θ2. θ1 is significantly larger than θ2. The angular clearance must be taken into account when designing the device and installing the bearing. 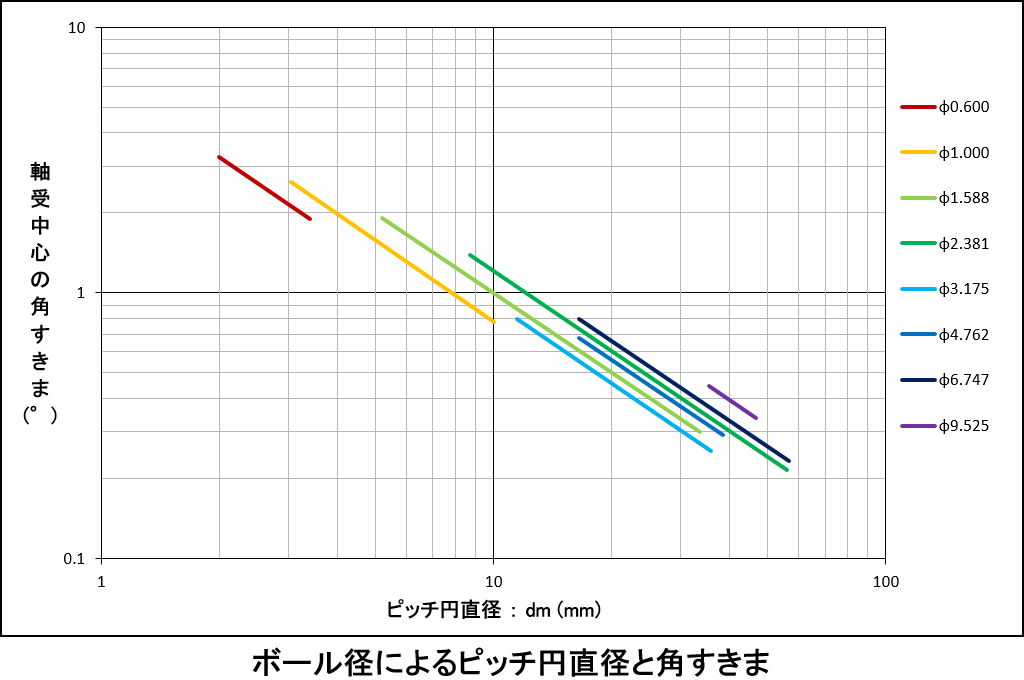 Pitch circle diameter and angular clearance according to ball diameter

Operating clearance refers to a clearance with elastic deformation caused by load and fitting during bearing operation at a constant temperature.

(2) Decreased clearance due to temperature difference between inner and outer rings: δt

Under normal operating conditions, the balls will have the highest temperature, followed by the inner ring, with the outer ring at the lowest temperature. It is difficult to measure the temperature of the balls, which is deemed to be identical to that of the inner ring for the sake of practical convenience.

(3) Decreased clearance due to fitting: δf

When the bearing is mounted on a shaft or the housing with interference, the outer ring will contract, while the inner ring will expand, resulting in a decrease in the bearing’s internal clearance.

When a load is applied to the bearing, the internal clearance increases due to elastic deformation.

The contact angle α at this time can be obtained by the following equation:

Axial Load and Axial Displacement, and Change in Contact Angle

When the ball bearing receives an axial load, axial displacement takes place due to elastic deformation, and the contact angle becomes larger than the initial contact angle. 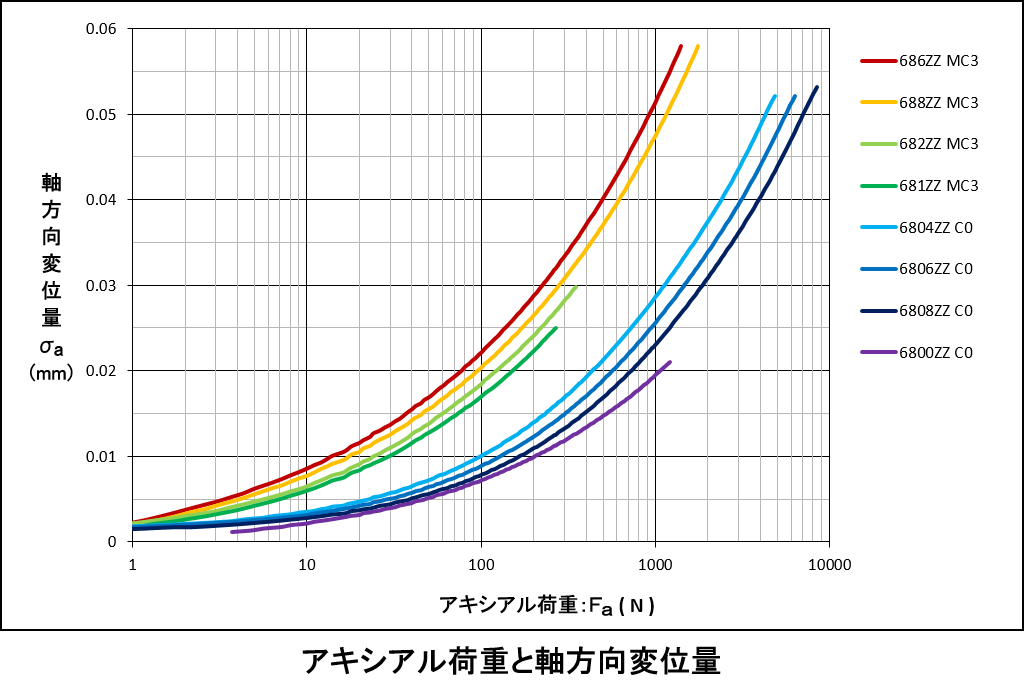 In the case of a deep groove ball bearing, the following relational equation is formulated between the radial clearance Δr and the load factor ε, and the function F(ε). Lε can be obtained from the relation between F(ε) and the life ratio Lε/L.

As shown in the example figure below, the longest life can be achieved when the clearance value is slightly negative. The figure also shows that as the clearance increases, the number of balls that receive the load decreases, which results in a shorter life. 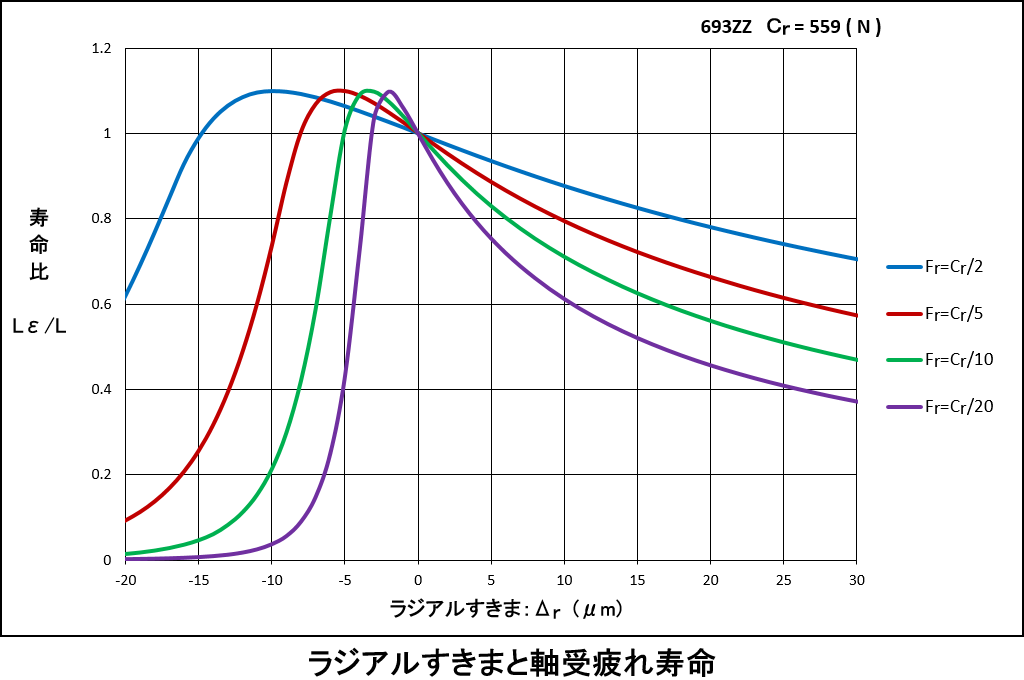